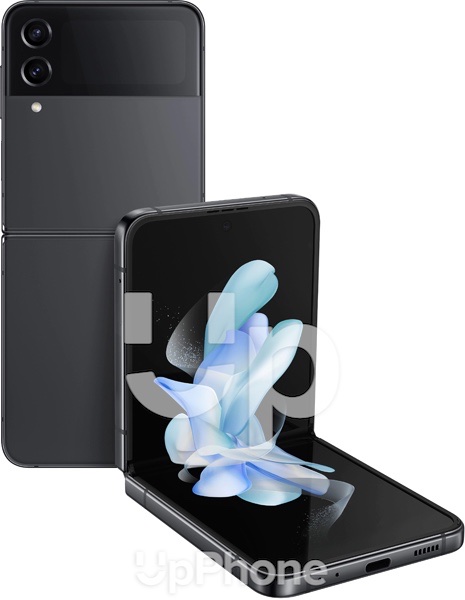 What Type Of Display Does The Samsung Galaxy Z Flip4 Have?

This phone has a 6.7 inch AMOLED Main Screen display. Like its predecessor, the Main Screen has a pixel density of 425 pixels per inch (ppi) and supports adaptive refresh rates of up to 120Hz. The Cover Screen is a 1.9 inch AMOLED display with 302 ppi.

What Type Of Camera Does The Samsung Galaxy Z Flip4 Have?

The Samsung Galaxy Z Flip4 has two rear 12 MP cameras. There's one Ultra Wide and one Wide-angle lens. On its front, the Z Flip4 has a 10 MP Selfie camera.

This phone is capable of recording video in up to 4K quality at up to 60 frames per second. Other recording modes include Hyperlapse 4K, Super Slo-mo, and Super Steady, which is great for taking videos of something in motion.

When folded, the Cover Screen can help you take pictures by displaying a viewfinder. Just press either volume button to snap a selfie!

How Much Storage Space Does The Samsung Galaxy Z Flip4 Have?

What Type Of Speakers Does The Samsung Galaxy Z Flip4 Have?

Does The Samsung Galaxy Z Flip4 Have Any Biometric Features?

Which Processor Does The Samsung Galaxy Z Flip4 Have?

The Z Flip4 has a Snapdragon 8+ Gen 1 processor and an Adreno 730 graphics processing unit.

How Long Will The Samsung Galaxy Z Flip4 Battery Last?

The Galaxy Z Flip4 has a 3,700 mAh lithium polymer battery, a 400 mAh increase from the Z Flip3. With fast charging, you can get an additional 50% of battery life in 30 minutes. This phone also supports reverse wireless charging.

The Z Flip4 has an ingress protection rating of IPX8. It's rated to be water-resistant, not waterproof, when sumberged in up to 1.5 meters of water for up to thirty minutes. Since this phone isn't rated for dust-resistance, Samsung recommends against exposing the Z Flip 4 to salt water.

Below, we’ll tell you about Verizon phone plans and help you find a great deal on the perfect one. Keep in mind that most Verizon plans include unlimited talk and text when comparing below!

If you or your family members use a lot of data every month, a Verizon unlimited plan is probably the way to go. You can mix and match from Verizon’s four unlimited plans, all of which include an Apple Music subscription. The Start Unlimited Plan is the least expensive, but it lacks many of the features included with other Verizon unlimited plans. It doesn’t include mobile hotspot, 5G phone access, or a premium 4G LTE data allotment.

The Just Kids Plan makes it simple to add your child to your Verizon plan. It includes 5 GB of 4G LTE data, 480p video streaming, and a variety of parental controls. You’ll need at least one qualifying Verizon unlimited plan in order to sign up for the Just Kids Plan.

However, unlimited data plans aren’t for everyone. You may not need premium data, 5G access, or 500 GB of cloud storage. A Verizon Prepaid Plan would probably be a better deal for you or your family.

The 5 GB and 15 GB Verizon prepaid phone plans do include mobile hotspot and rollover data. These plans don’t have overage charges either. If you exceed your high-speed data allotment, your data speeds are reduced to 2G. You can still use cellular data, it just won’t be as fast.

You can get a monthly discount on Verizon Unlimited and Prepaid Plans by enrolling for the autopay discount. Your card on record will automatically be charged every billing period. You’ll save money and never have to remember to renew your Verizon cell phone plan!

Verizon announced its nationwide 5G network alongside the iPhone 12 at the Apple Event in October 2020. While a nationwide 5G network may sound impressive, keep in mind that this is low-band 5G, which isn't much faster than 4G LTE. The network isn't really nationwide either — there are lots of large gaps across the country.

Verizon is lagging behind T-Mobile in terms of mid-band 5G coverage. Mid-band may be the most useful band for average consumers, as its faster than low-band 5G and has better range than high-band 5G.

We're not too excited about 5G — yet. Verizon, like the other major carriers, are making big investments in 5G infrastructure, which should yield some big results in 2021.