Home / Learn / Glossary / Cellular / What is An IMEI? Here’s The Truth!

Your phone's IMEI is something you might not know much about. However, your IMEI number incredibly important, as it can help trace your stolen or lost phone. In this article, I'll explain what an IMEI is and show you how to check for it on your cell phone!

What Does IMEI Stand For?

An IMEI, or International Mobile Equipment Identity, is a number assigned to most modern mobile phones and smartphones. Every IMEI is unique and consists of fourteen digits.

Your IMEI can identify and locate your device using your data plan and the cellular network your phone operates on. An IMEI can only identify devices that use a terrestrial cellular network — a network that uses antennas located on Earth rather than satellites.

What’s The Point Of An IMEI?

The purpose of the IMEI is to terminate stolen phones from accessing a cellular network, as well as validate identified devices. IMEI numbers have the ability to identify and locate devices globally, which deters thieves from swapping out the SIM card on a phone they stole.

It's basically impossible to change a phone's IMEI number without also doing some damage to the device. A phone's IMEI is imprinted on the battery compartment of the device, so any attempt to remove the number would likely damage the battery.

An IMEI Keeps Your Phone Safe

There's no safer way to stop phone thieves than with an IMEI. It's effective in tracking and disabling your stolen device by blacklisting the number. By rendering stolen phones useless using their IMEI numbers, it has never been easier to fight phone theft effectively.

Consumer Reports found that 2.1 million phones were stolen and 3.1 million smartphones were lost in 2014. By knowing your IMEI, or by using a feature like Find My iPhone, you'll be able to recover your phone whenever it goes missing!

Can My Phone's IMEI Be Used To Track My Location?

It'll be easier for the government to get a warrant if you've signed a contract with the carrier for your plan or phone. It's harder to track prepaid cell phones, which is one of the reasons why you'll see some nefarious individuals using “burner phones.”

How To Check Your Phone's IMEI

There are different ways to check your phone's IMEI, depending on the type of phone you have. If your phone has a removable battery, the IMEI can usually be found on or behind the battery. You can also find the IMEI of many different phones by dialing *#06# in the keypad.

A lot of knock-off smartphones have fake a fake IMEI or none at all. We recommend double-checking the IMEI number of a phone if you don't plan on purchasing from a wireless carrier, phone manufacturer, or a brand name big-box store.

How To Find An iPhone IMEI

You can find the IMEI of an iPhone by opening Settings and tapping General -> About. The number to the right of IMEI is your iPhone's IMEI. 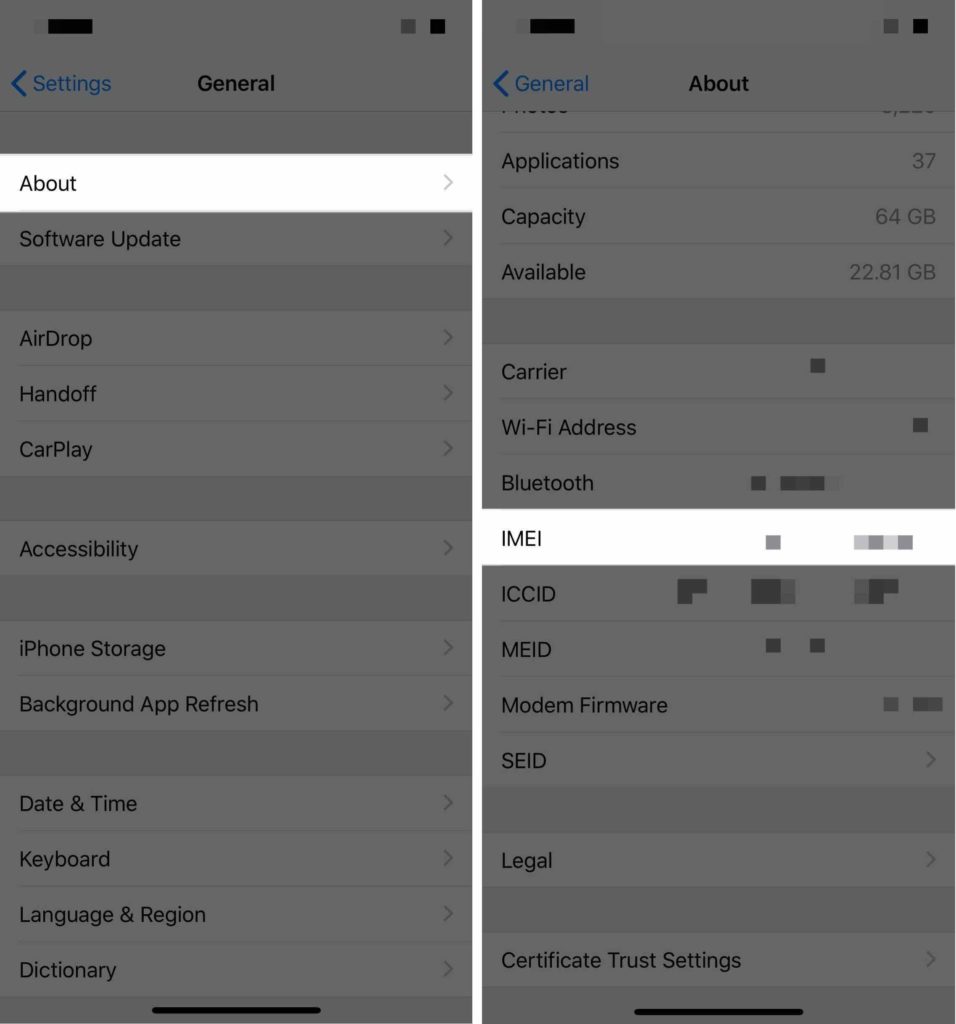 How To Find The IMEI On An Android

Although some Androids have different interfaces, you can usually find the IMEI of an Android by opening settings and tapping About Device -> Status. You'll find the IMEI number under IMEI.

I hope this article helped you understand what an IMEI is and why it's important to know your device's. If you have any other questions about your cell phone, feel free to ask us in the comments section below!

What is An IMEI? Here’s The Truth!